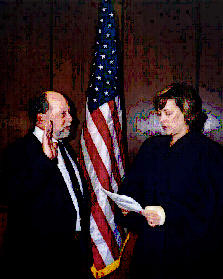 On Wednesday, July 3, 2002, Thomas Fote was sworn in as the Governor's Appointee to the Atlantic States Marine Fisheries Commission.  Mr. Fote was appointed by Governor McGreevey and sworn in by Judge Marlene Lynch Ford.

Tom Fote served as the Governor's Appointee from 1990 - 1996.  From 1996 - 2001, he attended ASMFC meetings as the proxy for the legislative appointee.  Mr. Fote believes there are many crucial issues facing the fishing industry (both commercial and recreational) and that he can represent those interests at the Atlantic States Marine Fisheries Commission.  He says, "One of the reasons members of the industry and the ASMFC respect me is that I do not reap any economic benefits from the decisions I make.  My policy has always been to look at the resource first.  Once that is protected I fight for both the recreational and commercial interests of New Jersey, insuring that everyone is treated fairly in every management plan."

Mr. Fote adds, "When I first joined the Commission my initial goal was to try to open the process to participation by all interested parties, something I knew was not happening from personal experience. When I attended my first ASMFC meeting as an interested member of the public in 1988, the public was not allowed to participate in any way and the Governor's and Legislative Appointees had no real power.  I feel I was instrumental in opening the process to the public.  Now public comments are allowed at all meetings and there are advisors representing the industry on all boards.  The Governor's and Legislative Appointees are caucusing members on every board and for every vote."

Mr. Fote is a retired Captain in the United States Army who received a medical discharge due to wounds sustained in Vietnam.  Mr. Fote has been an active member of the Jersey Coast Anglers Association and the NJ State Federation of Sportsmens Clubs for many years, currently serving as their legislative chairman.  He has also been active on environmental issues, serving on numerous boards for environmental groups.  He is currently serving on the Board of Directors for the NJ Environmental Federation and the Marine Fish Conservation Network.  He also serves on the Policy Board of the Barnegat Bay Estuary Program.